Lodha report- Some of its observations are pandering to populist views and may not be in the overall interest and development of the game.

The whole problem is we tend to emotionally react and enact rules to check anomalies.

In the process we miss the facts. The committee’s agenda was to ensure proper management of affairs based on interest of the game and its stake holders, players, fans, sponsors, public figures and politicians who may have genuine interests and also get many things done easily etc and draft proposals which can also ensure less corruption and improvement for the game in all its aspects.

In fact Railways and services, India cements, TVS etc have produced more players, nurtured their talents, groomed them, taken care of their livelihood etc than many states which are states in Map of India but not in the atlas of Indian cricket.

Some observations of Lodha report do not have any cricketing relevance; they appear as if the report is seeing the entire gamut of the game and its administration only through prisms of political nexus and corruption excess which make for a usual populist script for media and films not course correction.

Many states with greater geographical area have not produced a cricketer.

How many cricketers have Bihar produced or Sikkim or Assam or some other states for that matter?

Union territory Delhi has produced so many good cricketers that do not mean that we must demand a vote for Pondicherry and Andaman and Nicobar islands too.

Many Malayalam and Bengali movies are more realistic and sensible than bollyhood but only bollywood stars are popular and grab limelight and awards.

Will any committee say that each regional language film must have only one award? 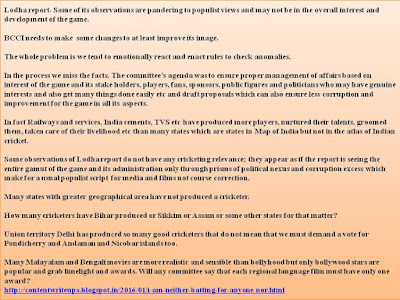