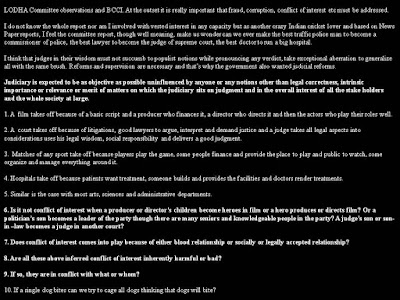 At the outset it is really important that fraud, corruption, conflict of interest etc must be addressed.

I do not know the whole report nor am I involved with vested interest in any capacity but as another crazy Indian cricket lover and based on News Paper reports, I feel the committee report, though well meaning, make us wonder can we ever make the best traffic police man to become a commissioner of police, the best lawyer to become the judge of supreme court, the best doctor to run a big hospital.

I think that judges in their wisdom must not succumb to populist notions while pronouncing any verdict, take exceptional aberration to generalize all with the same brush.

Reforms and supervision are necessary and that’s why the government also wanted judicial reforms.

Judiciary is expected to be as objective as possible uninfluenced by anyone or any notions other than legal correctness, intrinsic importance or relevance or merit of matters on which the judiciary sits on judgment and in the overall interest of all the stake holders and the whole society at large.

1.  A film takes off because of a basic script and a producer who finances it, a director who directs it and then the actors who play their roles well.

2. A court takes off because of litigations, good lawyers to argue, interpret and demand justice and a judge takes all legal aspects into considerations uses his legal wisdom, social responsibility and delivers a good judgment.

3. Matches of any sport take off because players play the game, some people finance and provide the place to play and public to watch, some organize and manage everything around it.

4. Hospitals take off because patients want treatment, someone builds and provides the facilities and doctors render treatments.

5. Similar is the case with most arts, sciences and administrative departments.

6. Is it not conflict of interest when a producer or director’s children become heroes in film or a hero produces or directs film? Or a politician’s son becomes a leader of the party though there are many seniors and knowledgeable people in the party? A judge’s son or son-in –law becomes a judge in another court?

7. Does conflict of interest comes into play because of either blood relationship or socially or legally accepted relationship?

8. Are all these above inferred conflict of interest inherently harmful or bad?

9. If so, they are in conflict with what or whom?

10. If a single dog bites can we try to cage all dogs thinking that dogs will bite?
Posted by balayogi at 6:36 AM