Don't allow to be divided by any

The danger of microfragmentation of national psyche.

If as a social group or a as a nation you allow yourself to be microfragmented by projected divisions over commonalities then you won't be able to actively do anything positive together;
Ultimately you may well end up being perennially passive takers of others opinions, thoughts and deeds of negative things as has happened to India's passive millions who have been tolerating all the paid media rants and selective projections wherein a Malda melts before media reaches like Dalda, whereas anti-national JNU-Journalists’ Negativity Unites to projections of all leaders visiting a anti-national camp in JNU. 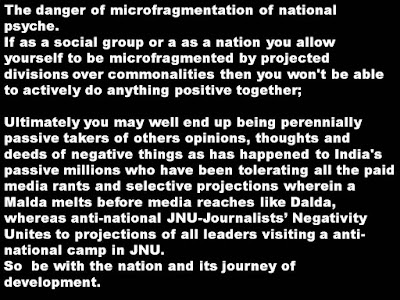 Email ThisBlogThis!Share to TwitterShare to FacebookShare to Pinterest
Labels: Divide and you disappear