Art of demanding more for art

http://contentwriteups.blogspot.in/2016/01/art-its-multiple-dimensions.html
Most of the art forms of Hindu culture starting from literature to dance to music to painting to architecture to yoga to religious rituals to religious discourses have never been taken as or treated as mere modes of entertainment or professional engagement or still worse the modern money making survival tool kit, but, on the contrary they were executed with great devotion and dedication, not only because of the religious significance or connotation attached to them, but they took into account, out of conscious realization, the most vital truth of life, namely the fact that life is primarily composed of three fundamental aspects, Physical [ includes all anatomical, organic and material aspects of life], Mental [includes all psychological, emotional, socio cultural aspects] and Spiritual [ the unseen but important aspect underlying all aspects of life] and also the fact that these three are interlinked and interdependent.
Therefore any Classical Indian music form or Dance form feeds all these three vital realms of life, otherwise these art forms should have been and would have been killed long back as newer and more attractive forms of entertainment emerged. That is the strength of our rich heritage which could not be destroyed by so many military and mental invasions. It is by no means a manifestation of being ethnocentric but excellence centric, so, let us be proud of all these.
From http://contentwriteups.blogspot.in/2011/11/bharth-matha-everything-in-her-is.html 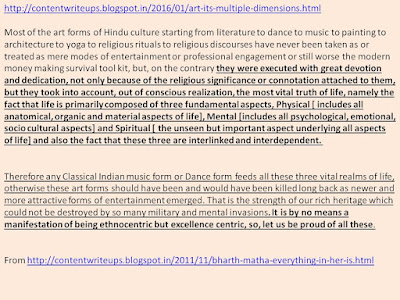 Email ThisBlogThis!Share to TwitterShare to FacebookShare to Pinterest
Labels: Art for art's sake .Art beyond money, Art of demanding more for art, art permeating in body, mind and spirit