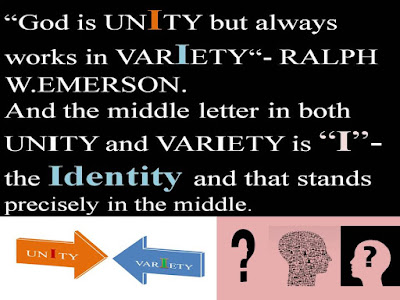 Let us etch the following four sentences in our hearts and heads.

1. “God is UNITY but always works in VARIETY" RALPH W.EMERSON

2.  Peace and Harmony are defined indirectly by wanting too much of same Identity in    everyone and everywhere and want of  Tolerance

3.  After all everything has an expiry date, including our mortal life.

4.  The curse of identity, which defines exclusivity, is a reality that interconnects us all.

One common feature in all these four statements above is that each sentence emphasizes the inevitable contradiction or the opposite or polarity.

And the middle letter in both UNITY and VARIETY is “I”- the Identity.

While data and information on any matter followed by analysis based on them leading to classification and categorization establishing certain distinct characteristics, features, factors, aspects either naturally occurring or purposefully attempted or forcefully injected reveals many things.

“Get out of your own way… stop the paralysis by analysis… decide what you want, create a simple plan, and get moving!” – Steve Maraboli.
But what it does at the same time is that it also seeks to label identities or insulate identities or assign or appropriate certain stereotypical portrayal of identities either to perpetuate or to promote or to put an end to or to divide humane race further with these labels.

But the mere fact of existence of these differences and identities need not necessarily lead to ideologically fixing or assigning all human beings into predefined labels thinking that everyone who may fit into such labels either subscribe to certain specific characteristics or deemed to be appropriating certain qualities.

The itch to stereotype and sensationalize especially sensitive shores of human relationships is rife with inbuilt dangers.

This presumption is the result of selective ideological fixations and brain washing propaganda.
This is the very reason we tend to mutilate the marvel of variety of human souls and spirits by trying to fit them in predefined boxes of labeled identities.
The problems that arise out of the excessive projection of and painting of all as subjects of these assumptions is that they get injected into the subconscious mind and pop  up at every perceived moment of  toxic intolerance or avoidable bias and phobia.

“All of us have our own inner fears, beliefs, opinions. These inner assumptions rule and govern our lives. A suggestion has no power in and of itself. Its power arises from the fact that you accept it mentally.” ― Joseph Murphy, The Power of Your Subconscious Mind

We must realize that the subconscious mind is the law of action and always expresses what the conscious mind has impressed on it. What we regularly entertain in our mind creates a conception of self. What we conceive ourselves to be, we become.”- Grace Speare.

Everything in nature is a manifestation of variety. With all species, flora and fauna including human beings- in their physical, ideological, religious, cultural, regional, social, political, intellectual, linguistic and artistic world – are expressions of this variety.

So let us neither perpetuate nor become a prey to any act that subscribes to such divisive identity projections through hazy prisms and crazy perspectives of perception –which by itself is very fallible.

Unfortunately, in the whole world Life's socio- political churning process instead of becoming and being more rational, scientific and humane, seems to get struck in identities of various hues and colors indicating a mindset worse than that of the sixteenth century.

The complications, dynamics and possibilities of Unity

What are required for global Citizenship or Worldology

The inevitable reality of polarity as a scientific factor

Xenophobia is the extreme folly

Invasion to accede territories as a sign of real estate veneration based patriotism is an outdated idea.

Importance of and role of relationships

The fact of genetic variety

It is better to avoid excessive projection of class, color or race as a social barrier and refrain from excessive victim hood projections as it contributes to make differences and prejudices into divisive forces and psychological perversions.

Why and how are perception itself is fallible