No need to worry about any social media read this in link below my rejoinder in attachment.
Twitter is actually a great tool


1. Well written and worthy observations and most of it are very relevant to take note of.

2. However, Twitter actually has immense business potential. I will give a brief outline later on how.


3. Besides, coming back to the predominant feature of your observations, is there a domain which has not been misused, over used or abused or misinterpreted starting from well meaning socio religious morals, to scientific and technological tools to nuclear power to media propaganda to political power to business operations? No.

4. The positives of all social media networks is that it has taken the exclusive privilege and preserve of a few of opinion peddlers, cocooned in their own comfortable ideological identities, like established media houses and instead empowered many to freely express their counter views.

5. So in a way the mass opinion molding and propaganda industry operating through select media houses has been greatly affected both in terms of their business and also in terms of their protected domain of influence.

6. As the number of people expression opinions/criticizing etc is more, we may see more abuse in certain issues.

7. Equivalently there are many useful, meaningful exchanges of information, knowledge, policies, and practices etc which are shared by greater number of people.

8. There is nothing wrong by the fundamental function of the tool as it is. It is the user who defines it as a good new sharp knife in a war front can be used for emergency operation or cutting the throat of anyone around. The knife or its sharpness is not at fault.

9. So, all social media networks are different emerging stars in the sky, not passing clouds, each with its own influence and impact.

10. It can actually enhance enormously through introducing many new simple features, upgrading certain functions, incorporating many apps, having tie ups with other stars in social media in the horizon etc 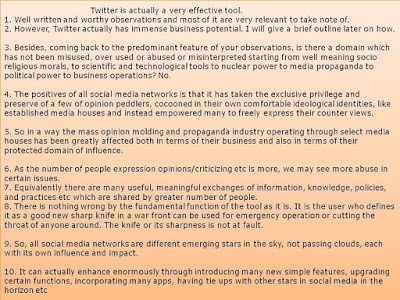