International Day of the Girl Child


International Day of the Girl Child

Various issues connected with girls need to be looked into and whole world needs to be educated that a girl is also a human being only then we can ensure that girls get educated.

As daughters and as women when they advance in age and take up different roles or perhaps assigned various roles in most societies.

Throughout history we see them undergoing many hurdles most of which are clandestinely slipped in through hypocrisies and hidden agenda of  social bias and most of it in the name of tradition, culture, religion etc.

Most of these are ingrained through centuries of indoctrination based on either inadequate knowledge of difference between biology and gender or purposeful exploitation perpetrated on a more tolerant gender.

Treatments, taboos and tortures vary from territory to territory but they are there.

We need to generate lot of actual data on societies which have prospered due to educating the girls.
First we need to learn a lot more about sex and gender; the various sexes and possible genders; each gender’s unique problems and powers; in short we need to socially evolve into more tolerant beings.

I have noted below some observations as and when they occurred to me when either I came across some issue in some debate, article or in personal life and penned down my thoughts.

This I wrote when I saw daughters were treated with bias

This I wrote when I when I noticed how no one showed any concern about the massive biological inconvenience called menstrual period occurs.

http://contentwriteups.blogspot.in/2014/07/womens-freedom-and-feminism.html
Next time when you get that string gender bias think of this genetic symptom getting into your system
http://product-boy.com/2011/08/06/select-population-of-females-turn-into-males-during-puberty-growing-male-genitalia/

Clear text book like explanation of difference between sex and gender 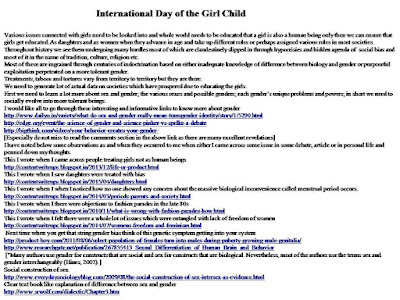 Email ThisBlogThis!Share to TwitterShare to FacebookShare to Pinterest
Labels: girls, International Day of the Girl Child