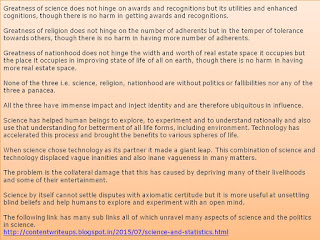 None of the three i.e. science, religion, nationhood are without politics or fallibilities nor any of the three a panacea.

All the three have immense impact and inject identity and are therefore ubiquitous in influence.

Science has helped human beings to explore, to experiment and to understand rationally and also use that understanding for betterment of all life forms, including environment.

Technology has accelerated this process and brought the benefits to various spheres of life.

When science chose technology as its partner it made a giant leap. This combination of science and technology displaced vague inanities and also inane vagueness in many matters.

The problem is the collateral damage that this has caused by depriving many of their livelihoods and some of their entertainment.

Science by itself cannot settle disputes with axiomatic certitude but it is more useful at unsettling blind beliefs and help humans to explore and experiment with an open mind.

The following link has many sub links all of which unravel many aspects of science and the politics in science.
http://contentwriteups.blogspot.in/2015/07/science-and-statistics.html
Posted by balayogi at 3:01 AM