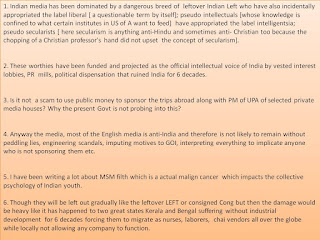 1. Indian media has been dominated by a dangerous breed of  leftover Indian Left who have also incidentally appropriated the label liberal [ a questionable term by itself]; pseudo intellectuals [whose knowledge is confined to what certain institutes in US of A want to feed]  have appropriated the label intelligentsia; pseudo secularists [ here secularism is anything anti-Hindu and sometimes anti- Christian too because the chopping of a Christian professor's hand did not upset  the concept of secularism].

2. These worthies have been funded and projected as the official intellectual voice of India by vested interest lobbies, PR  mills, political dispensation that ruined India for 6 decades.

3. Is it not  a scam to use public money to sponsor the trips abroad along with PM of UPA of selected private media houses? Why the present Govt is not probing into this?

4. Anyway the media, most of the English media is anti-India and therefore is not likely to remain without peddling lies, engineering scandals, imputing motives to GOI, interpreting everything to implicate anyone who is not sponsoring them etc.

5. I have been writing a lot about MSM filth which is a actual malign cancer  which impacts the collective psychology of Indian youth.

6. Though they will be left out gradually like the leftover LEFT or consigned Cong but then the damage would be heavy like it has happened to two great states Kerala and Bengal suffering without industrial development  for 6 decades forcing them to migrate as nurses, laborers,  chai vendors all over the globe while locally not allowing any company to function.
Posted by balayogi at 7:27 AM