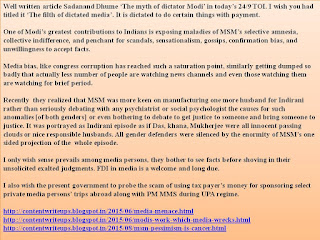 Well written article Sadanand Dhume ‘The myth of dictator Modi’ in today’s 24/9 TOI. I wish you had titled it ‘The filth of dictated media’. It is dictated to do certain things with payment.
One of Modi’s greatest contributions to Indians is exposing maladies of MSM’s selective amnesia, collective indifference, and penchant for scandals, sensationalism, gossips, confirmation bias, and unwillingness to accept facts.
Media bias, like congress corruption has reached such a saturation point, similarly getting dumped so badly that actually less number of people are watching news channels and even those watching them are watching for brief period.
Recently  they realized that MSM was more keen on manufacturing one more husband for Indirani rather than seriously debating with any psychiatrist or social psychologist the causes for such anomalies [of both genders] or even bothering to debate to get justice to someone and bring someone to justice. It was portrayed as Indirani episode as if Das, khana, Mukherjee were all innocent passing clouds or nice responsible husbands. All gender defenders were silenced by the enormity of MSM’s one sided projection of the  whole episode.
I only wish sense prevails among media persons, they bother to see facts before shoving in their unsolicited exalted judgments. FDI in media is a welcome and long due.
I also wish the present government to probe the scam of using tax payer’s money for sponsoring select private media persons’ trips abroad along with PM MMS during UPA regime.
http://contentwriteups.blogspot.in/2015/06/media-menace.html
http://contentwriteups.blogspot.in/2015/06/modis-work-which-media-wrecks.html


http://contentwriteups.blogspot.in/2015/08/msm-pessimism-is-cancer.html
Posted by balayogi at 4:43 AM