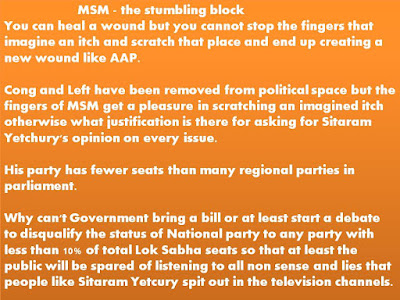 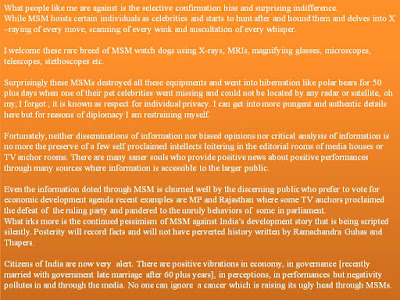 What people like me are against is the selective confirmation bias and surprising indifference.

While MSM hoists certain individuals as celebrities and starts to hunt after and hound them and delves into X –raying of every move, scanning of every wink and auscultation of every whisper.

Surprisingly these MSMs destroyed all these equipments and went into hibernation like polar bears for 50 plus days when one of their pet celebrities went missing and could not be located by any radar or satellite, oh my, I forgot , it is known as respect for individual privacy.

I can get into more pungent and authentic details here but for reasons of diplomacy I am restraining myself.

Fortunately, neither dissemination of information nor biased opinions nor critical analysis of information is no more the preserve of a few self proclaimed intellects loitering in the editorial rooms of media houses or TV anchor rooms.

There are many saner souls who provide positive news about positive performances through many sources where information is accessible to the larger public.

Even the information doted through MSM is churned well by the discerning public who prefer to vote for economic development agenda recent examples are MP and Rajasthan where some TV anchors proclaimed the defeat of  the ruling party and pandered to the unruly behaviors of  some in parliament.

What irks more is the continued pessimism of MSM against India’s development story that is being scripted silently. Posterity will record facts and will not have perverted history written by Ramachandra Guhas and Thappers.

There are positive vibrations in economy, in governance [recently married with government late marriage after 60 plus years], in perceptions, in performances but negativity pollutes in and through the media.


No one can ignore  a cancer which is raising its ugly head through MSMs.

You can heal a wound but you cannot stop the fingers that imagine an itch and scratch that place and end up creating a new wound like AAP.

Cong and Left have been removed from political space but the fingers of MSM get a pleasure in scratching an imagined itch otherwise what justification is there for asking for Sitaram Yetchury's opinion on every issue.

His party has fewer seats than many regional parties in parliament.

Why can't Government bring a bill or at least start a debate to disqualify the status of National party to any party with less than 10% of total Lok Sabha seats so that at least the public will be spared of listening to all non sense and lies that people like Sitaram Yetcury spit out in the television channels.