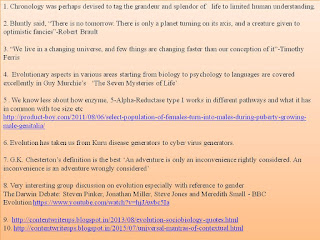 1. Chronology was perhaps devised to tag the grandeur and splendor of   life to limited human understanding.

2. Bluntly said, “There is no tomorrow. There is only a planet turning on its axis, and a creature given to optimistic fancies”-Robert Brault

3. “We live in a changing universe, and few things are changing faster than our conception of it”-Timothy Ferris

4. Evolutionary aspects in various areas starting from biology to psychology to languages are covered excellently in Guy Murchie’s
‘The Seven Mysteries of Life’

5 We know less about how enzyme, 5-Alpha-Reductase type 1 works in different pathways and what it has in common with toe size etc
http://product-boy.com/2011/08/06/select-population-of-females-turn-into-males-during-puberty-growing-male-genitalia/

6. Evolution has taken us from Kuru disease generators to cyber Guru Venerators.

10. http://contentwriteups.blogspot.in/2015/07/universal-mantras-of-contextual.html
Posted by balayogi at 7:09 AM