Contempt versus Care or is it the Intolerant versus the tolerant-contrast between Santosh Desai and Swapan Dasgupta.
The Freudian slips of writers reveal their indoctrinated subconscious contempt or admiration however much they may try to sandwich them with well toasted vocabulary.
Media persons are entitled to their hidden agenda, simmering discontent, lurking suspicions, ulterior motives but not sickening stereotyped presumed victimhood projection, propaganda or condescending tone of describing the land where you are born and feeds you and paint everything in poor light.
There were two articles in Sunday Times of TOI-Chennai Edition, I am going to play the media role here ‘clear the scum’ and ‘cherry pick’.
First ‘clear the scum’ which indicates a narrow mindset of a writer who introspected frankly some months ago about the declining value of media. But then he himself writes this, “Brand India erases the messiness of the larger Indian reality and dresses up the nation…” [Incredible India or incredibly lazy –by Santosh Desai]-this shows contempt –pleases editorial policy
And cherry pick, “There is an important distinction between intellectual ferment and frenetic activism that goes by the name of student politics. The quest for ideas leads to the sharpening of the mind; activism on the other hand reduces the mind to unflinching certitudes and vacuous slogans. More often than not, the latter defeats the purpose of education”.  [Our universities are out of touch with Young India by Swapan Dasgupta]-this shows a real care or concern-pleasing to read and share.
In the info-maniacal age with real time transmission of facts and actual happening through various means very few are bothered, at least with regard to any social or political news, to read or watch MSM news channels for the cooked up lies and distorted perversions called reports.
Those who do not  have the knowledge of flip board, www.journalistexpress.com etc may still read news papers out of sheer addiction, but even they are becoming sick and tired of highly opinionated paid news with  political overtones and ideological undercurrents. This leaves news papers with readers who would like to read some good articles with enlightened views, preferably devoid of avoidable controversies, instigating or implanting divisive thoughts etc. This is reaching a saturation point wherein MSM will get buried by social media, sober reports taking the sensitivity of public into consideration. For exaggeration and sensationalism we have movies, we do not need newspapers or news channels. 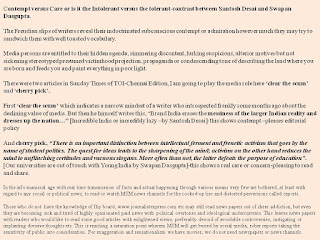 Email ThisBlogThis!Share to TwitterShare to FacebookShare to Pinterest
Labels: Contempt versus Care