TMK - The Media Keepsake of ideological disease and

The Mania for Keeping on peddling victimhood in any subject.

Why neither any media nor any individual is questioning the following?

I want to know on what basis or who authorized him that he was in the four member selection panel of Kalakshetra to appoint top officials?  This selection panel incidentally appointed M.Sankaranarayanan as Deputy Director.

Misusing media nexus to manipulate and being articulate in English is neither a virtue by itself nor is a requirement for Carnatic Music or the administration of Kalakshetra.

Actually the vast lands of kalakshetra can be converted into at least some 1000 mini halls for concerts, music schools, colleges, conference halls, canteens too with all the trees in place.

A very highly educated gentleman recently said ‘Kalakshetra is becoming a kerala shetram , I do not mean anything about artists but the coterie is leftist –more so after someone was shifted from Bengal here’ 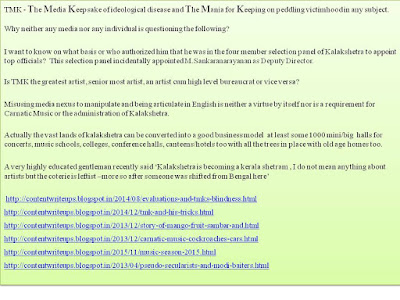