What is common to Chennai floods, population growth in Delhi, Mumbai floods and Bangalore traffic jams?
Starting from Chennai floods devastation to yearly flooding of Mumbai and its overcrowded trains to exponentially increasing population of Delhi to perennially traffic jammed roads of Bangalore all are merely the symptoms on surface of a grave disease and a deep rooted malady which has not been addressed by Indian Governments seriously till 2014.
After NDA came to power in 2014 May they tried to address this issue but as usual nexus of some opposition parties long with vested interest NGOs and the ignorant and indifferent media anchor room judges contributed to stall this progressive step.
I was born in a village with a very fertile land so naturally agriculture was the primary as well as predominant activity and source of livelihood.
But I did not have good schools, obviously no college nor industry nor proper roads.
Like the human body requires various parts any geographical region also requires various activities and facilities to live.
So when I wanted my son to get educated I was forced to sell the agricultural land and migrate to suburb to work in some urban activity.
However as we could not afford cost of living in metros we chose to reside some thirty KMS away from metro city travelled everyday to work. Travelling took 4 hours of our daily life.
Fortunately my children got educated they have obtained vehicle loans and are travelling everyday in their private individual vehicles two wheeler and four wheeler but spend almost the same amount of time everyday in travel.
We are not an isolated case leading this type of life style there are thousands like us who have migrated and lead a similar life and contributing to the growth of automobile industries, fuel industries and adding to pollution, back pain and pulmonary disorders.
When I thought of the vicious circle of this economic model where one’s problem enriches others’ business and went to visit the poor farmers in my village working hard and continue to be at the mercy of middlemen.
I felt that I must bring my leftover poor villagers also to this new found lifestyle of relative comforts with all its daily struggle in urban and suburban areas but I was astonished to find many NGOs making business out of poverty eradication programs and therefore had given these villagers a false sense of perennial hope masking eternal want and dependence on doles with controlled doting out of freebies.
Then I felt why we cannot have at least a bit of everything in every place. It is in short, if described  devoid of jargons of specialist economists and management gurus, is known as balanced overall economic development of all areas with at least basic infrastructure like roods, good schools, hospitals, industries etc so that we can avoid huge migration of everyone to the metro for a decent living.
This requires implementation of Land Acquisition Act but then political parties and NGOs who make a living by making people remain poor so that they can continue to peddle slogans of victimhood and ensure these poor people flock around them won’t allow India to develop everywhere with infrastructure.
It does not require a rocket scientist to identify the deep disease and also the obvious remedy.


Now that Land Acquisition Act is blocked by all vested interest status quo addicts the government can indirectly give lot of exemption and also extend tax benefits to those who start good schools, hospitals and industry in non urban and suburban areas, then reintroduce bills to bring in infrastructure development in villages. 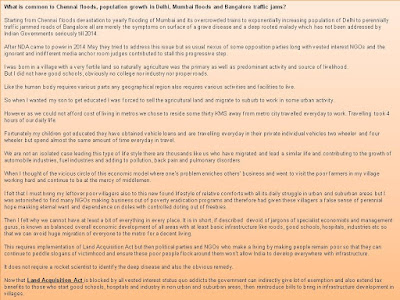