International Politics and Diplomacy are not as simple as the words that are used.

It is too complex and complicated defying logic, legality, morality, humanitarianism sometimes even the usually perceived games, schemes and strategies of politics itself.

Very often it involves not even any known or perceived territory but sharp intuition coupled with very systematic, scientific and silent operations to achieve a desired goal.

This involves a carefully crafted and calculated strategy of selective publicity and putative silence.

This cannot be, need not be and preferably better must not be revealed to the manipulative, sensationalism seeking, opinion peddling and pretentious know –all and judge-all half baked media anchors and news analysts.

No strong or sane politician or political leader anywhere in the world takes media, especially main stream media seriously because they know the pulse of the matters better than these paid media fellows.

But what is worse is these paid media, especially of the breed of Indian main stream media, have brought such a general disrepute to the very profession of journalism on the whole that no one takes media criticism or opinion seriously.

People use flip board for news, multiple websites for gossips and views and use social media to express their own reactions- all for good.
The political and religious outfits which were paying these main stream media to manipulate news and generate views are themselves losing relevance slowly among the educated youth across the globe.

So sooner or later these paid media houses will disappear for good.

For those who are really keenly interested in knowing the possible dimensions of international politics and its dirty manifestations may o through this for what it is worth.
http://beforeitsnews.com/new-world-order/2015/01/new-3-5-hour-documentary-jfk-to-911-everything-is-a-rich-mans-trick-while-flawed-presents-valuable-historic-insights-into-elite-machinations-3528.html 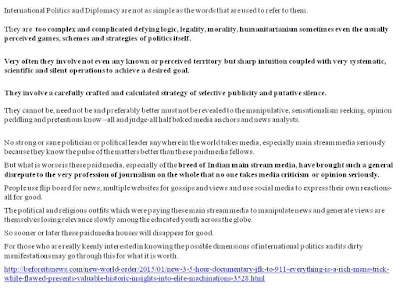