Religions are important in many of their role, influence and impact so everyone must be aware of all its aspects and respect it too but not get addicted to it, pledge life and living to its identity and lose sight of priorities for one’s own self and for the society at large.

Most importantly , no supreme power would ever long for the statistical evaluation of number of followers and doing that is actually demeaning whichever God one is praying to, because he/she makes it sound as if that divinity desperately needs to establish its superiority only through number .

There is no doubt every religion has contributed, influenced and impacted many areas of human life in the early times of human evolution. So, we all need to respect that role. But at the present movement predominantly there are too many things that need to be prioritized over religion, I mean all religions.

So, I personally feel that all religions and most religious activities could be relegated to the back ground in terms of relevance to life on the whole as large amount of population are struggling for basic survival needs and are devoid of any literacy or education.

It is precisely this vulnerable people who are portrayed as victims and the preferred beneficiaries of divinity with slogans like ‘God loves the poor’ etc.

The line that differentiates between faith, ferventness and fanaticism becomes too thin sometimes to justify inhumane activities in the name of religion.

Though there are many exceptions and I would not like to brush everyone with the same color, still there are many whose very sustenance financially, and/or identity socially hinge on tagging on to some religion or religious connected activities.

In certain cases that inspire and in some cases instigate.

It is difficult to define intentions; Science/technology has not come up with a machine which can deduct intentions.

So it would be better that sanity prevails over everyone that they cannot lead a life only with all the tall claims of religion, it at best helps the marketers of divinity in all religions.

Because we need to remember one thing while all of us feel the need for unity, what unity needs is feeling for all by all. 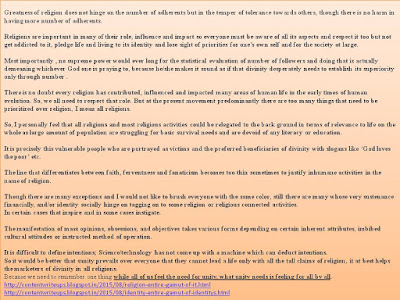 Email ThisBlogThis!Share to TwitterShare to FacebookShare to Pinterest
Labels: greatness of religion, Impact of religion, relevance of religions, religions and number of followers, religious greatness, unity