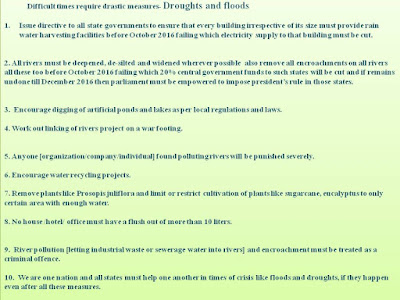 Difficult times require drastic measures- Droughts and floods
1.Issue directive to all state governments to ensure that every building irrespective of its size must provide rain water harvesting facilities before October 2016 failing which electricity supply to that building must be cut.
●
2. All rivers must be deepened, de-silted and widened wherever possible  also remove all encroachments on all rivers all these too before October 2016 failing which 20% central government funds to such states will be cut and if remains undone till December 2016 then parliament must be empowered to impose president’s rule in those states.
3.  Encourage digging of artificial ponds and lakes as per local regulations and laws.
4. Work out linking of rivers project on a war footing.
5. Anyone [organization/company/individual] found polluting rivers will be punished severely.
6. Encourage water recycling projects.
7. Remove plants like Prosopis juliflora and limit or restrict cultivation of plants like sugarcane, eucalyptus to only certain area with enough water.
8. No house /hotel/ office must have a flush out of more than 10 liters.
9.  River pollution [letting industrial waste or sewerage water into rivers] and encroachment must be treated as a criminal offence.
10.  We are one nation and all states must help one another in times of crisis like floods and droughts, if they happen even after all these measures.