Self correction and accepting change

Judicial interference in religious activities of faith that too selectively is bad. However, common sense and common good of all  forms of life and sensitive  concern toward s that must prevail  over everything else.
Like in everything else, religious activities too change is an inevitable component for evolutionary growth and development.
So, people involved in practicing certain traditions and rituals within the faith must start minimizing or giving lesser importance and wherever possible even do away with certain practices if they can hurt or harm other species and has greater probability of causing ,inconvenience, damage and danger to our own lives as well.
Neither the intensity of any faith nor the relevance of any religion may get reduced because of such self imposed disciplines.
Religions are a good mix of theories, dogmas, doctrines, rituals, traditions, scriptural dos and don'ts, sermons for better behavior, cultural entertainments, socio -cultural values, physical care, environmental care and nature worship.
Religions also have imparted many philosophical concepts meant to enhance human life imbued with humanitarian values; to improve social life imbued with compassionate values and to enlighten the spiritual life imbued with sensitivity to all forms of life.
All of the above are influential, important, and impactful in varying degrees at different contexts.
Unfortunately most of them also have been subjected to multiple interpretations due to lack of empirical authentication or for want of documented evidences.
However, some of them are always relevant, time tested and useful for humanity.
It is good to want to adopt them or to appropriate them.


But then when they are done with some ulterior motives and manipulations and in some cases done because wanting to desperately appear relevant, or merely as an outcome of either ideological or traditional indoctrination then it deviates from all the seriousness and substance of religiosity and becomes a mere ritualistic perpetuation of another activity devoid of both its intrinsic essence and contextual relevance. 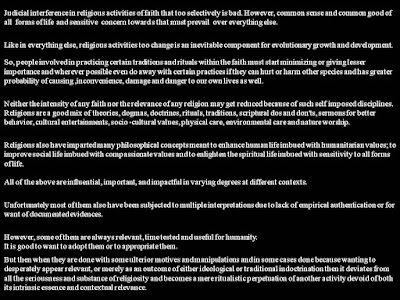 Email ThisBlogThis!Share to TwitterShare to FacebookShare to Pinterest
Labels: change, self correction