This not about our media or leftist ideologies infecting our campuses
This is a malady that the drifting Leftist ideologies create in all places, in all ages leaving people culture less, pride less, identity less living a life in vacuous inanity and nurtured inferiority complex and a sense of victim hood when there is none.
It was initially used as a political brainwashing technique as a ploy to play by magnifying the societal disparities to dislodge the Empires in many parts of the world but then gradually these self appointed leaders of socialist movements and leftist ideologies gradually replaced the kings and carried on the same atrocities and enjoyed the same privileges as the kings knowing well that they could easily intoxicate the masses with catchy slogans, brainwashing ideological sign posts, selective presentation of victim hood etc 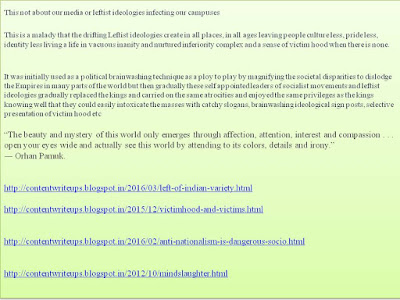