“All of us have our own inner fears, beliefs, opinions. These inner assumptions rule and govern our lives. A suggestion has no power in and of itself. Its power arises from the fact that you accept it mentally.”
― Joseph Murphy, The Power of Your Subconscious Mind

We must realize that the subconscious mind is the law of action and always expresses what the conscious mind has impressed on it. What we regularly entertain in our mind creates a conception of self. What we conceive ourselves to be, we become.” Grace Speare.

Human beings all over the world are conditioned by some form of ideology or religious identity superimposing over the fundamental and intrinsic values of human beings as a species with certain unique faculties.

Conditioning, leading to some ideological identity, is it necessary?

Can we avoid or escape from it?

Can we deny or defy it?

In my opinion these are tough for various reasons.

This conditioning which is universally practiced by all religions, ideological political outfits, institutions of all hues and colours. As JK repeatedly says this condition creates a screen through which human beings observe the world.

Therefore, the very observation is not what is actually there. Then, based on this coloured observation born out of conditioning, specific frames of realities are generated based on which we build the ABCD of life

Form faiths and Frames of references

Grasp and Get along,

Justify and Jump to conclusions,

Kindle our interests and Kindly deal with others,

Like or Love something or someone and Live along with it,

Manifest in many realms and Mark that conditioning in all of them,

Operationalise activities and Obsessively overrate them,

Prioritize preferences and Proclaim and parade them with pride,

Question social actions and Queue up to react,

React to issues and even Reason based on these identities;

Shape our sensitivities and Sense of significance

Tolerate and Take inside our ‘mind space [time]’ to synergize,

Understand and Use it [conditioning] to connect with the world

Validate various values systems and Vilify those not falling in line

Yield to pressures of political correctness and Yonder into fantasized future,

Zealously engage in all hypocrisies and Zip file them for future conditioning.

If this conditioning and wearing an identity on us is universal and is an inevitable aspect of the social milieu wherein we human beings [as social animals] are born, then we cannot avoid it or escape it through hyper philosophizing it as a collective wisdom.

It is these identities which manifest in the majority of human activities and also glue societies together in various forms of regional/national traditions, cultures, languages, practices, customs as well as international interactions.

So, without all these human beings, culturally and psychologically will hover in suspended animation with ‘inane vagueness or vague inanity’ or take up counter or anti-conditioning camps.

Therefore, the best we can do is to avoid succumbing to it totally and not allow it to overpower us so much as to stifle our growth, freedom to frankly express and lead a life as we deem it correct or calm or conducive to cohabit.

Hence, those types of conditioning which are fundamentally having a very negative, harmful and violent impact on all the above listed activities must be made to reform and transform from within , failing which , everyone must have at least the freedom to withdraw to secure sanity for the sake of humanity. 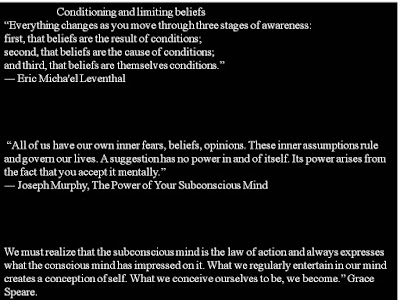 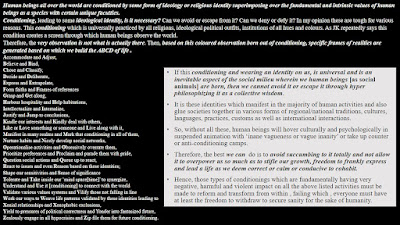 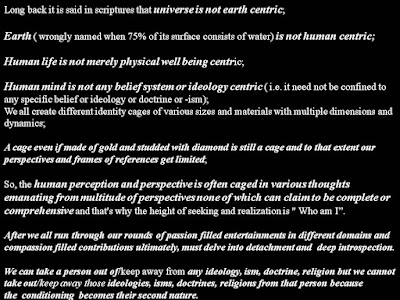