Seniors  of RSS and BJP a fervent appeal -think, introspect and decide what you want  for India- Economic development under Modi’s-BJP? Or AAP or LALU or CONG back in power? Choice is yours.
Bharath is great country in terms spirituality, varied rich cultures and heritage but a poor nation economically.
We need to prioritize only economic development.
Prominence and popularity come with prioritizing contextually relevant performance and putting in abeyance things, ideologies, outdated aspirations in back seat at least for another 15 years.
The seniors of BJP, RSS have become unwitting prey to media propaganda that has landed in electoral defeat in recent times.
Do not become enemies from within; do not put self goals which make the anti-national forces winners.
BJP seniors, RSS loose tongued seniors, BMS naïve leaders just ask yourselves are you willing to work with AAP and LALU or do they ever support or praise you on any issue after getting elected  or did the media  bother to bring in their mikes after the electoral victories there.
RSS, Senior leaders of BJP, VHP etc are great contributors to formation of this government but please understand the importance of taking care of your baby without allowing anti national and anti developmental forces take charge again.
All your experiences, maturity and wisdom are necessary for nation building.
But do not suffocate economic development agenda of BJP government with any indoctrinated ideology or identity however good it may be.
If BJP government is not in power no one will be even there to listen to you, please remember that because you will not even get a stall in international market of economic fair.
All great critics of present BJP government either from RSS or BJP or BMS itself must realize that they lived in deafening silence and perennial fear all these years.
Become mature and start living in present times.
Now you face media cameras wherever you go and the media which projects every controversial comment of yours giving you a popularity or notoriety.
But remember if BJP government is not in power you will not face media cameras but mafia guns and attacks.


Also remember that the greatness of Sanathana Dharma is that it does not require nor recognize any institute as a marketing outfit. 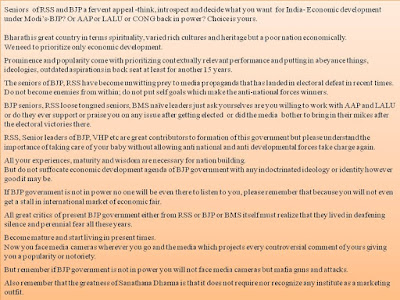 Email ThisBlogThis!Share to TwitterShare to FacebookShare to Pinterest
Labels: BJP and RSS seniors need to realize