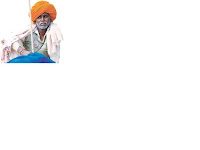 LET US HONOUR HIM AND REMEMBER HIM AS LONG AS WE LIVE ON THE EARTH
Dear Madam/ Friends/Scientists
What we have at present are only back cross materials obtained from the materials of natives of this land. It does not carry any ethic Justice to patent them.I too tried to patent a material that I have developed after my departure from Central Inst.for Cotton Research (Sundaramurthy, V.T., 2003. A high yielding quality cotton variety for sustainable agriculture in the Peninsular India under irrigated situation. World Cotton Research Conference-3, South Africa, Cape Town P 607-612 [South Africa]) to prevent the invasion of a bad culture into a private research establishment thro some one. But I did not proceed further as my conscious has pricked me.The patent system is a barrowed culture from West and this should go out of our land with full of Dharma. Feeding the people in India is considered as a great Dharma of first order and let us not decimate this great culture by patenting the farmers’ materials.
In this context I wish to earth up one incidence that took place some year’s back.A Scientist who developed a method for synthesis of L form of amino acids.The L (l) (levorotatory) form is all most like natural one and easily take in by our cells than d/dl Forms. He has approached several establishments for manufacturing the amino acids for helping the mankind with the condition that his method should not be patented. But the establishments have insisted for patenting his method. But He has flatly refused and his beautiful method is in letters in his file. Such Humane Scientists are also living with us. We now change a fraction of the structure and claim that it is my construction. This I consider as an inhuman one. Let our public and private Institutions come forward to disband this bad culture of patenting the crop varieties which have emerged from the natives abode and feel proud of keeping our DHARMA of feeding fellow man irrespective of colours going for ever.
Regards
Smurthy


Monday, 2 May 2011 12:14 PM
http://www.downtoearth.org.in/content/whose-seed-it-anyway
WHOSE SEED IS IT ANYWAY?
Author(s): Latha Jishnu
Issue: May 15, 2011
The rich world’s mania for patenting seeds and pushing the UPOV agenda do not aid food security or biological diversity
Photo: Sayantoni PalchoudhuriFarmer-breeders are an unsung tribe. In far corners of the world, farmers study the seeds they use, experiment with them, do simple back-crossing to improve yields and taste, and quite often come up with winners. Some farmers are geniuses when it comes to improving their seed and introducing simple but effective agronomic practices. And they quite readily share the fruits of their researches with fellow farmers.

Some weeks ago, I met Dadaji Khobragade, father of the famous HMT rice variety that is hugely popular in four states of India apart from his native Maharashtra. HMT rice—it was named after a popular wristwatch brand of that era—is said to give yields that are much higher (80 per cent is the claim) than most other varieties and Khobragade insists it tastes better, too. When he came to Delhi with the Kisan Swaraj Yatra, the farmer from the hinterland of Nanded had just made it to the Forbes list of the “seven most powerful rural Indian entrepreneurs” whose “inventions are changing lives across India”.
Khobragade has definitely changed lives with his high-yielding HMT rice that fetches a handsome premium but it was hard to discern a “powerful rural entrepreneur” in the bespectacled, wizened man in his 70s. He personifies the plight of the small farmer. Khobragade has no land of his own—his small farm was sold to pay for the treatment of a family member—and he quite often works as a daily wage earner. In the early 1990s when HMT became sought after, the Panjabrao Deshmukh Krishi Vidyapeeth, the local agricultural university, took five kg of HMT seeds from Khobragade saying its rice station wanted to experiment with it. A few years later, the university released a new variety called PkV HMT, a “purified” version of Khobragade’s seed. The vice-chancellor of the university is quoted as saying: “The original seed may have come from Khobragade, but now it is entirely the University’s intellectual property (IP).”
As a multitude of organisations, farmers and activists observe April 26 as International Seed Day, it is instructive to see how the world looks at ownership of seeds. The day is designed to educate people about food freedom and recommends keeping seeds patent-free. That seems like a lost cause when the developed world is intent on pushing seed patents and advocating agreements that bring every kind of seed into the IP regime. The most obvious of such efforts is the International Union for the Protection of New Varieties of Plants or UPOV, the intergovernmental organisation with its headquarters in Geneva. UPOV, established by the International Convention for the Protection of New Varieties of Plants, has gone through three revisions since it was ratified in 1968 and its objective is to protect new varieties of plants by IP rights. It does not recognise farmers’ rights but gives primacy to those of commercial breeders. India is not a member of UPOV and has its own sui generis system that recognises and protects the rights of farmers and their role in conserving, improving and making available plant genetic resources for the development of new plant varieties. It is, perhaps, only one of the three such laws worldwide.
India, therefore, has been under sustained pressure to join UPOV but the terms under which it would join any of the revised agreements has been a thorny issue. India had started the procedure for accession to UPOV way back in 1999.
India’s Protection of Plant Varieties and Farmers’ Rights Act is said to be compliant with UPOV-1978 but it remains to be seen if India is allowed to join on that basis or whether it will have to amend its domestic law to conform to the later versions of the convention.
So, it is interesting that a just-released study on UPOV calls for far-reaching changes in UPOV, and makes special mention of lack of transparency and democratic accountability in its working. There is restricted participation from non-members, including stakeholders, it says, and cautions that “UPOV was designed by and for European commercial breeding interests”—a focus which continues today.
The new study by the Quaker United Nations Office report also looks at an issue that has troubled several developing countries. UPOV is housed in the World Intellectual Property Organization (WIPO) and, significantly, the study finds this problematic. It recommends a relook at the dual role of the WIPO director general as secretary general of UPOV since UPOV is not part of the UN. It also suggests that UPOV should look at the relevant recommendations of the WIPO Development Agenda and apply these to its own work. Something else that should hearten farmers’ rights organisations are the serious questions that the report raises on the impact of UPOV on food security and biological diversity. Indian officials should keep these findings in mind when they resume negotiations on UPOV membership.
Tags: Patently Absurd, Agriculture, Farmers, Food security, Intellectual Property Rights (IPR), Latha Jishnu, Patents, Plant Breeding, Seeds, UPOV


--
My Thanks to:
KAVITHA KURUGANTI
Alliance for Sustainable & Holistic Agriculture (ASHA)