Impact of three important components of liberalization, i.e., FDI, trade and technology on wages and employment in the organized manufacturing sector of India in the post reforms period.
Further, the results show that domestic innovation in terms of research and
development intensity has been labor utilizing in nature but import of technology has
unfavorably affected employment

Before announcing any reforms in contentious areas such as taxation, financial services
and the public sector central government face constant judgments at the tribunal of public opinion.
According to the current policy FDI can come into India in two ways. Firstly FDI up to
100% is allowed under the automatic route in all activities/sectors except a small list
that require approval of the Government. FDI in sectors/activities under automatic route
does not require any prior approval either by the Government or RBI. The investors are
required to notify the Regional office concerned of RBI within 30 days of receipt of
inward remittances and file the required documents with that office within 30 days of

issue of shares to foreign investors.51 All proposals for foreign investment requiring
Government approval are considered by the Foreign Investment Promotion Board
(FIPB). The FIPB also grants composite approvals involving foreign investment/foreign
technical collaboration.52 As this clarity is useful for future investors, it has to be seen if
these bodies are effective. The Initial research revealed four major bodies that have
been constituted and could provide data pertaining to FDI
1991 Foreign Investment Promotion Board FIPB
• consider and recommend Foreign Direct Investment (FDI) proposals, which do not
come under the automatic route. It is chaired by Secretary Industry (Department of
Industrial Policy & Promotion).
1996 Foreign Investment Promotion Council FIPC
• constituted under the chairmanship of Chairman ICICI, to undertake vigorous
investment promotion and marketing activities. The Presidents of the three apex

business associations such as ASSOCHAM, CII and FICCI are members of the
Council.
1999 Foreign Investment Implementation Authority FIIA
• functions for assisting the FDI approval holders in obtaining va
rious approvals and
resolving their operational difficulties. FIIA has been interacting periodically with the
FDI approval holders and following up their difficulties for resolution with the
concerned Administrative Ministries and State Governments.
2004 Investment Commission
• Headed by Ratan Tata, this commission seeks meetings and visits industrial groups

and houses in India and large companies abroad in sectors where there was dire
need for investment.
51 Department of Industrial Policy and Promotion. 2005. Foreign Direct Investment-Policy
& Procedures. New Delhi: Government of India. p.2. Available at
http://dipp.nic.in/manual/manual_03_05.pdf. Internet.
52 Ibid.
Centre for Civil Society
Attempting to research directives and results of the above bodies resulted in no direct
contact but instead a list of various other sub bodies.

• Project Approval Board (PAB) for approving foreign technology transfer
proposals not falling under the automatic route.
• Licensing Committee (LC) for considering and recommending proposals for grant
of industrial license.
• In addition, concerned Ministries/ Departments issue various approvals as per the

allocation of business and various Acts being administered by them.
• At the State level, State Investment Promotion Agency and, at the district level,
• District Industries Centres, generally look after projects.
• Concerned departments of the State Government handle sectoral projects.
• Fast Track Committees (FTCs) have been set up in 30 Ministries/Departments for
close monitoring of projects with estimated investment of Rs. 100 crores and above
and for resolution of issues hampering implementation.
• “Investment Promotion and Infrastructure Development Cell” gives further
impetus to facilitation and monitoring of investment, as well as for better

coordination of infrastructural requirements for industry
• SIA has been set up by the Government of India in the Department of Industrial
Policy and Promotion in the Ministry of Commerce and Industry to provide a single
window for entrepreneurial assistance, investor facilitation, receiving and processing
all applications which require Government approval, conveying Government
decisions on applications filed, assisting entrepreneurs and investors in setting up
projects, (including liaison with other organizations and State Governments) and in
monitoring implementation of projects.

• CCFI Cabinet Committee on Foreign Investment- meets at the ministerial level
and is guided by the prime Minister, considers foreign investment exceeding Rs 3
billion as requiring special political attention.
• Indian Missions Abroad- can also receive project proposal and will forward tem to
the institutions in New Delhi.
• Indian Investment Centre- (This was supposed to be closed after the Planning
Commission was established but still continues to operate) established as an
autonomous organization in 1960 with the objective of doing promotional work
abroad to attract foreign private investment into India and establishment of joint

ventures, technical collaborations and third country ventures between Indian and
foreign entrepreneurs.
The face of FDI usually resides with pamphlets and amalgamation of facts and figures
that are circulated through many conferences. From these it can be deciphered that
officially FDI policy is reviewed on an ongoing basis and measures for its further
liberalization are taken. The change in sectoral policy/ sectoral equity cap is notified from time to time through Press Notes by the Secretariat for Industrial Assistance (SIA) in
the Department of Industrial Policy & Promotion. Policy announcement by
Centre for Civil Society
- 19 -
SIA are subsequently notified by Reserve Bank of India (RBI) under

Foreign Exchange Management Act (FEMA).53
Thus while clear procedures have been established for FDI, government needs to
seriously evaluate how much resources and money is being poured to what is becoming
the FDI industry. The fluidity of bodies has resulted in the monetary value of FDI
feeding a makeshift industry that deals with dealing with the concept and procedures
of FDI.

Conclusion
As evidenced by analysis and data the concept and material significance of FDI has
evolved from the shadows of shallow understanding to a proud show of force. The
government while serious in its efforts to induce growth in the economy and country
started with foreign investment in a haphazard manner. While it is accepted that the
government was under compulsion to liberalize cautiously, the understanding of foreign
investment was lacking. A sectoral analysis reveals that while FDI shows a gradual
increase and has become a staple for success for India, the progress is hollow

(Annexure 1 and 2). The Telecommunications and power sector are the reasons for the
success of Infrastructure. This is a throwback to 1991 when Infrastructure reforms were
not attempted as the sector was performing in the positive. FDI has become a game of
numbers where the justification for growth and progress is the money that flows in and
not the specific problems plaguing the individual sub sectors.
Political parties (Congress, BJP, CPI (M)) have changed their stance when in power and
when in opposition and opposition (as well as public debate) is driven by partisan
considerations rather that and effort to assess the merit of the policies. This is evident is

the public posturing of Hindu right, left and centrist political parties like the Congress.
The growing recognition of the importance of FDI resulted in a substantive policy
package but and also the delegation of the same to a set of eminently dispensable
bodies. This is indicative of a mood of promotion counterbalanced by a clear deference
of responsibility.

In the comparative studies the notion of Infrastructure as a sector has undergone a
definitional change. FDI in the sector is held up primarily by two sub sectors
(telecommunications and Power) and is not evenly distributed.
The three major industrial houses (CII, ASSOCHAM, FICCI), World Bank and the
Planning Commission have similar recommendations for FDI and yet despite their
concurrence, a comprehensive policy in this respect is still to be formulated after 15
years of India’s economic reforms. The Swadeshi alternative has receded in public policy 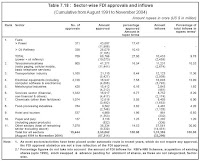