DISSENT need not necessarily mean gross disrespect to institutions of importance and personalities holding top positions with the responsibility of maintaining the dignity of such institutions.

So, referring to such persons is a synecdoche of the institution itself.

Spewing venom on anything that does not succumb to specific and selective  ideology peddling backed by groups which struts around with pomposity and presumptive inflated image appropriating terms which have a good aura like intellectual, liberal and putrefying them to suit their petrified ideology cannot be a construed as dissent or freedom of speech

Internationalize or internalize for

Sensationalizing and scandalizing to

Exaggerations and extrapolations through

Terminological terrorism as a trend.

Drilling in drastically or diplomatically

Surreptitiously and sugar coating them with 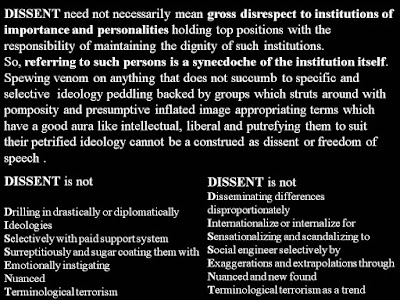 Email ThisBlogThis!Share to TwitterShare to FacebookShare to Pinterest
Labels: dissent