Learning and urge to express 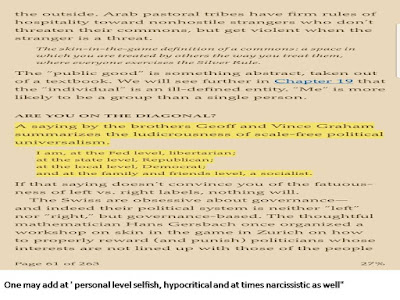 Good one and for your info dear VS I have been following almost all the write ups of Hans Gersbach and Volker and Winker.


They throw open lot of unbiased observations, good ideas too in the realm of Finance, Economics, Entrepreneurship, political system.


Their criticisms and suggestions are very nice and useful but unfortunately not implementable in all regions or societies, especially those in the process of social engineering involving weaning away from entrenched in religious doctrine oriented traditions and excessive adoration of the past etc.


As proposing and penetration of new ideas and systems becomes tougher in terrains occupied by luddites of various hues and colors like status quo addicts, confirmation bias admirers and venerators of their own past tinged with an inherent insecured xenophobic reactions.

But sooner or later the inevitable changes will inundate life as a part of evolution beyond and despite all resistances.

I even went ahead and suggested to classify many such good articles in the realms of socio-political economics into categories like the unexplored, worth exploring and the unknown to bring in a big pool of idea bank from which the administraters can choose their cup of tea.


X says :One sociologist said that all statements are political. I would rather add that all desire to issue statements is narcissistic....more so in the so-called social media.

But then I say everyone needs some platform to express their views, interpretations, criticisms, appreciation etc. SM offers one, till the advent of SM it was the preserve of a select few


X : True. Now it has become Equal number of pearls before equal number of swines as Huxley foretold. We are all well and truly into the era of over- simplification and over-generalisation.

I reply :Learning starts out of curiosity; saunters through limitation; steps into conscious observation and stops to savour into expressing whatever is learnt through some medium and in some way.


Ironically the very process of excessive spawning of multitude of expressions through Social media throws up enormous variety which extinguish over simplification and over generalization and renders orchestration of mass opinion ineffective.


Though all opinions need not be sane or sublime but nonetheless gives room for everyone to express what they want and that is perhaps the very reason for its popularity.
Posted by balayogi at 3:18 AM

Email ThisBlogThis!Share to TwitterShare to FacebookShare to Pinterest
Labels: Learning and urge to express