This mixed with the  media mafia nexus with leftover Left lunatics engineering  irrelevant issue to divert voters acted as a heady cocktail with unpleasant hangover and headache ahead for Nitish from Lalu.

They instigate people between two extremes of phobia and philia.

The script is basically this: Leftist ideologies create an atmosphere in all places, in all ages leaving people culture less, pride less, identity less living a life in vacuous inanity and nurtured inferiority complex and a sense of victim hood where there is none.

It was initially used as a political brainwashing technique as a ploy to play by magnifying the societal disparities to dislodge the Empires in many parts of the world but then gradually these self appointed leaders of socialist movements and leftist ideologies gradually replaced the kings and carried on the same atrocities and enjoyed the same privileges as the kings knowing well that they could easily intoxicate the masses with catchy slogans, brainwashing ideological sign posts, selective presentation of victim hood etc and in India since only this breed was subservient to a particular family and also clandestinely acted as a conduit of funds to many this breed was promoted with a label called Intelligentsia and they created their own parasites and parrots in many institutions and media houses.

They are actually not even interested in Muslims , otherwise they would helped many Muslims to come out of poverty and got many more girls well educated .

They just misuse them for promotion of their own selfish agenda through exploiting them.

But now as more and more Muslim youth in India are seeing the reality these leftover Left and their other affiliated and afflicted beneficiaries are undergoing a identity crisis and holding on, like a sinking man, to the last straw the MSM.
Left are so desperate to survive after scripting all sorts of nonsense and instigating peace loving workers in all spheres of life through imagined stories of victim hood and illusions of ill treatment.

Ensuring lack of development of Kerala and West Bengal, despite great scholars and excellent people, is a testimony to their outdated and unworkable ideological fixations.

Today Karat talks of copying RSS where leaders don’t nominate their wives and where service is prioritized. 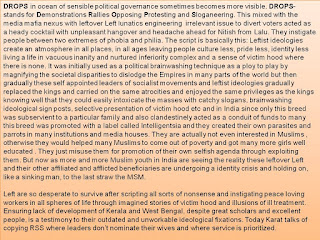 Email ThisBlogThis!Share to TwitterShare to FacebookShare to Pinterest
Labels: communist in India, drops