A need for Swatch Bharath in Literary circles- Sahitya Academy raise to the occasion- an intolerant appeal from a tolerant citizen.

In brief language is the queen of sciences and king of arts because all arts and sciences can be expressed and explained fully; enjoyed and experienced at least to a certain extent through language.

So there is no need to explain further as from religious scriptures to political speeches to all scripts, to research findings to song lyrics are weaved out of words of some language.

The greatness of language over any other medium like music, painting, science etc is its unhindered, unlimited access to any or many or almost all dimensions of life known and perceivable to human beings. In that aspect language is omnipotent in its influence and impact.

As a medium it uses two methods Oral [speaking] and written [writing].

Whatever is the frame of reference it is wrong and very narrow to generalize writings, all writings as having something to do with some political ideology. There cannot be more degrading view about writing.

So the level discussion about writing in general in our Sahitya academy reveals a very conditioned and confined mentality which is not at all healthy for the nation.

As we are after almost six decades trying to take great strides in economic development , scientific activities, technological achievements etc we also need to pay attention to ensure to revive the glorious literary traditions of our nation which have been gifted to the world through great literary descriptions of Kalidasa, the great epics of Valmiki and Vyasa etc; to  great philosophical literature through many scholars starting from Adi shankara through Swami Vivekananda to Shri Auro Bindou to Rabindra Nath Tagore to Kabir to Kamban to JK to Osho etc and also synchronize them with great writings of the globe in various languages. Kindly excuse me for not mentioning many great works in many great languages of India as the list will be too big and besides I have not savored them in their original language.

The hall mark of most ancient literature in India has been the unbiased, unconditioned and board minded expression in any topic they chose, never shunning anything out of any bias, that’s why as a civilization, perhaps Bharath was, perhaps the first country to have a detailed discussion in atheism through scriptures.

So, at any cost the literary scenario has to be saved from the narrow gutters of political ideology peddlers, especially the self proclaimed leftists who have appropriated the label of intelligentsia. It is actually a very good sign that some among them have realized the need to clean the literary scene by coming forward to return their awards voluntarily.

It is a good beginning, let Government of India/Ministry of Culture/Sahitya  Academy etc please gracefully accept all the awards returned back and give it to those scholars who have been denied them for narrow political reasons.

By doing this we can fulfill the need for Swatch Bharath in Literary circles. 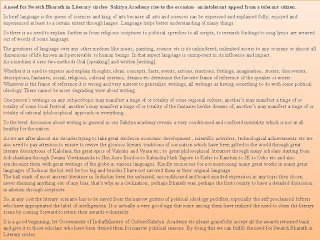 Email ThisBlogThis!Share to TwitterShare to FacebookShare to Pinterest
Labels: Art Of Writing, writing