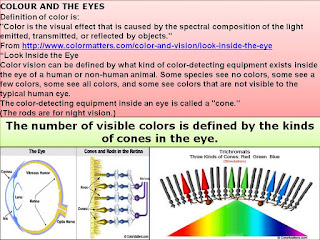 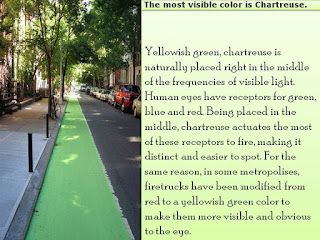 1.    Colors conjure lots of feelings, ideas, and emotions depending on
the connections

2.    Colors have a huge influence or impact, of course according to the level of sensitivity or sharpness of the organ eyes or the mind or temperature or species or instrument or person noticing it.

3.    Some people may wonder how temperature and mind are involved.

4.    In fact to know this people must read detailed book s on evolutionary biology.

5.    Guy Murchie write in his wonderful book The seven Mysteries of Life , “Tests have shown too that a mammal's sight and hearing cease to function about when his temperature gets down to 94°F. Or his pulse to 40 a minute. His breathing becomes undetectable around 8o°F., his heart stops by 50°F., and oxygen is hardly needed in any form below 39°F.”.

6.    He also writes in the same book , “In humans the senses of heat and cold are less acute than in most animals and are usually described as twin senses using differentiated sets of specialized nerve cells: a set of about 150,000 in the outer fiftieth of an inch of the skin to register cold and another of 16,000 deeper in the skin to register heat. While human skin fluctuates a good deal in temperature, averaging around 81°F., and doesn't seem to be thermostatically controlled like blood, a mysterious skin area has been discovered in the center of the forehead that registers temperature differences as small as one sixtieth of a degree. I haven't heard any anatomist associate it with the "pineal eye," an eyelike structure in the forebrain believed by some to be a vestigial sense organ or "third eye." But I notice that, in the case of hagfish, lampreys and a few reptiles, the counterpart of this lobe evidently evolved what have been described as "visual structural adaptation," and there is growing evidence that it produces at least a little actual vision. Probably the most interesting thing about this comparison of infrared and visual seeing is that these brother senses caught the world's attention only recently with the discovery that the hypothalamus is not only the body's thirst center and central "eye" of temperature awareness, but that, significantly, the temperature eye and the visual eye both evolved from the same matrix at the bottom of the third ventrical of the brain, out of which the visual eye moved forward to view the outer world, while the temperature eye turned inward to monitor the blood, their relation becoming one of the most elegant instances of sense complementarity in all the kingdoms of life”.

7.    In occult science lot of importance is given to the colors in the aura around the persons, places, things etc.

8.    Musical notes or tunes are also converted into colors sometimes by experts.

9.    While the expression face is the index of the mind is very popular, I am surprised why no expressions like eye is the best tool of observation or attention.

The ppt and pdf have 155 informative slides I wish you go through them
especially slides 2, 16 and 17
Posted by balayogi at 6:34 AM