Real scholarship which requires constant learning it would be better the eject all forms of hidden agenda and preconception.

Nothing wrong in any agenda driven approach but then it dents the thought process, dictates frames of reference, designs the perception and delves more on the outcome rather than the developing an outlook based on unbiased observation and broad perspective.

This type of approach devoid of or away from one's entrenched and often internalised preferences, perspectives and prejudices is difficult.

However, if we can manage such an approach it will pleasantly surprise us with an ability to grasp even subjects of which we may have hardly any prior knowledge.

This approach may produce scholars with humility and compassion rather than mere academic experts.

The first few steps of scholarly approaches are childlike curiosity, unbiased observation, extended reflection, perusing whether what is observed can be empirically tested, safely adopted and meaningfully used with optimum user-friendly application to enhance life in as many of its aspects  for as many human beings as possible without harming other species to the maximum 8extent possible.

Once these preliminary steps are followed and then during extended reflection one can calmly evaluate the contextual relevance of or utility of whatever is observed and steadily study the concepts and philosophies that offer synergy with what one has observed.

Then there emerges a real scholar or scholarly writer who is one humble, curious and unbiased observer of synergy and synthesis, either occurring as an aspect of evolution or consciously effected through a culture of compassion, that enable to understand better the inter connectivity, interrelatedness and interdependence of life as a whole. 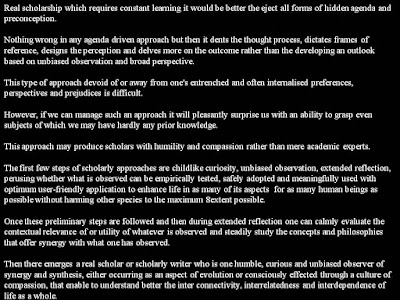 Thank you so much for the detailed article.Thanks again.