Since we don’t know which factors and aspects have been included and also how they have been measured and interpreted we may proceed with the assumed methodology considered to be usually applied for any macro-economic surveys.

Most indexes are supposed to factor in on priority basis two sets of rather over generalized items considered vital measuring tools for modern life.

So, obviously when these two are clubbed together there may be more anomalies than uniform j         justifiable standards.

On lighter vein sometimes some of the pungent remarks made by Nassim Taleb regarding economists seems worth looking into.
An economist is a mixture of 1) a businessman without common sense, 2) a physicist without brain, and 3) a speculator without balls.

Discussing growth without concern for fragility: like studying construction without thinking of collapses. Think like engineer not economist.

A trader listened to the firm's "chief" economist's predictions about gold, then lost a bundle. The trader was asked to leave the firm. He then angrily asked him boss who was firing him: "Why do you fire me alone not the economist? He is too responsible for the loss." The Boss: "You idiot, we are not firing you for losing money; we are firing you for listening to the economist."

To have a great day: 1) Smile at a stranger, 2) Surprise someone by saying something unexpectedly nice, 3) Give some genuine attention to an elderly, 4) Invite someone who doesn't have many friends for coffee, 5) Humiliate an economist, publicly, or create deep anxiety inside a Harvard professor. 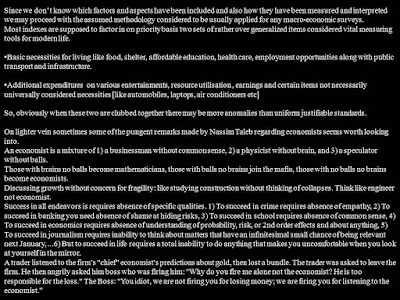