Everything in life is a step

Everything in life is a step
Every activity or domain too has to go through the steps.

These steps are various types of status quo addictions, comfort zones, identity cages which take possession of our psyche and operates through it almost as a matter of habit or sometimes even as an automatic reflex movement. They then manifest in all spheres of our relationships. our culture, our religious practices, our food habits, our life styles etc and we get used to the comfort of relaxing in these steps without moving up.


The real mistake is in all of us, when we mistake steps for stops.

The mistake is not in the symbols themselves but venerating symbols as the most significant essence;

The mistake is not in the masks but venerating the masks as reality;

The mistake is not even in having blind beliefs if one has not been able to come out of it, but in insisting and trying to bind everyone with those beliefs as if they are the only way to lead a superior life and as if only therein exists a panacea;

The mistake is not even in having any fervent faith but in making its intensity to inflict fanatical fear among those who do not subscribe to a particular faith;

The mistake is not in any outward appearances or apparels but using it as a influencing factor manipulating gullible persons;

The mistake is not even in managing to use certain outward symbols to gain mileage from the poor gullible souls-that is what almost all religions, ideological outfits whether political or social have done for centuries though that does not justify them in anyway- but in misusing or abusing the mileage for personal aggrandizement or megalomaniacal power grabbing and so on.

The mistake is not in any in any outward show or portrayal.

The mistake is not in any steps but mistaking the steps as stops. [1]

All mistakes emanate because of either fear or love from a majority, these two emotions manifesting in varying degrees have been scrupulously used for any mass opinion molding both by religion and politics from time immemorial but anyone can make all mistakes disappear with proper

PR- Power as Responsibility,
Prioritizing with Relevance,
Perception based on Relevant frames of reference [2] all leading to
Prosperity for a Rejuvenated life style for all

The media though is HandiCapped and selectively makes merry, mocking certain symbols whenever it feels like Suit- boot, Saffron saint etc but never ever had the guts to call Hands that went under the table or Capped culprits –the two parties which had a coalition as well as cooperation from media because they sponsored them. 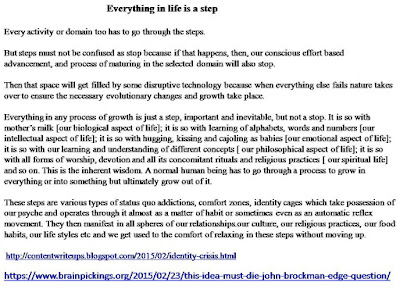 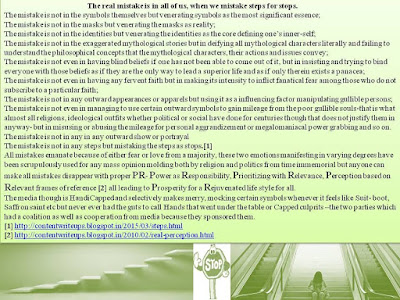 Email ThisBlogThis!Share to TwitterShare to FacebookShare to Pinterest
Labels: Steps and stops