I  wrote some 25 years back and then posted in 2014 also during some occasion that the word ‘liberal’ meant ‘ privilege’. Link  given below .
It was not out of imagination but based on etymology and references from great  authors and authorities in History .
You can read all that .But I never knew that SC of Indian will treat  self  styled  or media labeled ‘liberals’ as privileged citizens. SC has set a very unfortunate and highly debatable precedent.
The word liberal from latin liberalis  “ noble, gracious, munificient” and according to one of the best books on history ‘History for a united world’ that I have read long back by an author called Edward Herbert Dance  he mentions that the word liberty and liberal were used for nobles and the aristocrats and it indicated or referred more to ‘class privilege than anything else’ this author incidentally writes “  India was far advanced in many areas when the west was still groping about in dark ages”
To know about the etymology of the word liberal and freedom read the link below
https://contentwriteups.blogspot.com/2014/02/liberty-freedom-liberal.html 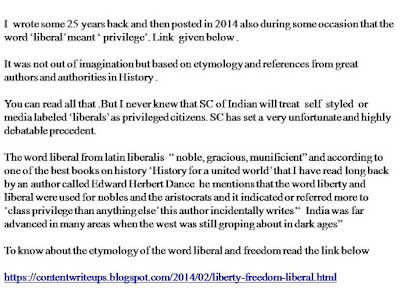 Email ThisBlogThis!Share to TwitterShare to FacebookShare to Pinterest
Labels: Liberals