Scientific theories, hypothesis are also not final or ultimate.

Most of these theories are, even to those, who study the subject in detail, can throw them into great confusions as Fritjof Capra writes, just for a sample

1906 JJ Thomson gets Nobel Prize for Physics for saying electrons are particles.

1933 Schrodinger gets Nobel  prize for Physics for stating for stating we can't  know what state or place an atomic particle is in until it is observed which means they ( particles) could have been , hypothetically, in all states and places till then

1937 G.P. Thomson son of JJ Thomson gets Nobel Prize for physics for saying that they are Waves. 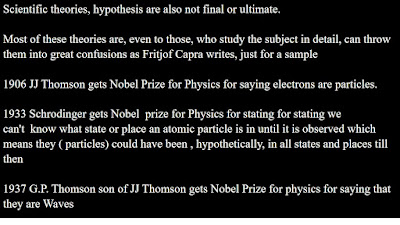 Email ThisBlogThis!Share to TwitterShare to FacebookShare to Pinterest
Labels: Theories