Reality –how do we know what it is and still tough how do we define or communicate.

Life has no panacea.

We can neither defy nor deny the existence of anything.

Everything may evolve out of chaos but not anarchy.

Life is an unmapped atlas consisting of unexplored territories and a jig saw puzzle without any given shape or form. Perhaps, without even all the necessary pieces available in the box to create any recognisable frame or figure.

That’s why it is better to go with the tide of the inevitable evolutionary churning process of life in all spheres of life and preferably immerse any topic or subject matter, primarily and basically with all their  intrinsic elements/components/aspects/attributes intact, into a cauldron which may have  a mixture of some or all of these:-

Limited perception- based on frames of reference and scales of observation;

Rational thinking- as rational approaches refine what is otherwise viewed as contrasts that divide into variations that seek synergy;

Contextual relevance based prioritizing [which includes too many components],

Scientific scrutiny and so on.

Then, churn the cauldron without clinging on to any particular restrictive social, cultural or political or religious identity or ideological constraint.

This process inevitably may bring out lot of outputs.

We can exercise our freedom and sometimes select and choose some of the outputs.

Sometimes the outputs will draw us.

Sometimes away from all or any of our intended searches and seeking, outside the circle of these known paradigms, almost tangentially serendipity will drag us to an oasis of serene clarity.

Ken Wilber in his work ‘No Boundary: Eastern and Western Approaches to Personal Growth’ like these two small pieces, “Even to say ‘reality is no-boundary awareness’ is still to create a distinction between boundaries and no-boundary! So we have to keep in mind the great difficulty involved with dualistic language. That "reality is no-boundary" is true enough, provided we remember that no-boundary awareness is a direct, immediate, and nonverbal awareness, and not a mere philosophical theory. It is for these reasons that the mystic-sages stress that reality lies beyond names and forms, words and thoughts, divisions and boundaries. Beyond all boundaries lies the real world of Suchness, the Void, the Dharmakaya, Tao, Brahman, and the Godhead. And in the world of suchness, there is neither good nor bad, saint nor sinner, birth nor death, for in the world of suchness there are no boundaries.”  And “The ultimate metaphysical secret, if we dare to state it so simply, is that there are no boundaries in the Universe. Boundaries are illusions, products not of Reality, but of the way we map and edit Reality. And while it is fine to map out the territory, it is fatal to confuse the two."

On a lighter vein is Reality the jigsaw puzzle involving these things: Nothing, Everything, Anything, Something.

Even as Jarod Kintz says, “Nothing, Everything, Anything, Something: If you have nothing, then you have everything, because you have the freedom to do anything, without the fear of losing something.”

We must not hesitate to analyse anything and everything in depth from as many angles as possible but also ultimately find out the points of or areas of or domains of synthesis/synergy leading to harmony and unity with all variety and/or differences in tact. This is will be the automatic progression of life experience and life itself.

Now in the context of international Unity, Peace and so on what is it? 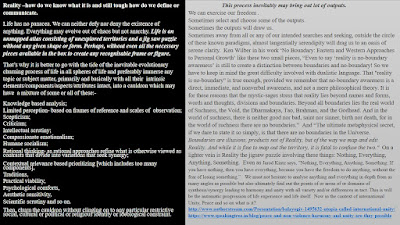 Email ThisBlogThis!Share to TwitterShare to FacebookShare to Pinterest
Labels: Reality –what it is