A.P.J. Abdul Kalam is an embodiment of unique brand of humanitarianism.

A.P.J. Abdul Kalam is an embodiment of unique brand of humanitarianism.

Everybody who is somebody has said something about A.P.J. Abdul Kalam for various reasons. So, let us move away from his bio-data and biographical sketches, as they have been well documented by many.

Normally people of extremes grab the attention of biographers, i.e. those who deserve to be vilified or venerated. It is so because of the impact that they create, through instigation or inspiration, with their ability, dexterity, utility etc.

We normally classify all of these under one broad banner as contribution to humanity for our convenience because we do not know and also do not want to take the trouble of learning the art of unbiased appreciation of activities, attributes in terms of contextual relevance.

He neither perceived life through the prism of prejudices nor did he comprehend life through the confines of confirmation bias based on any specific ideology be it religious, cultural, social, political, academically anointed isms, national, scientific hypothesis etc but carried on life with a love for life in its completeness with carefree abandon of childlike inquisitiveness, natural humility, unqualified inhibition-free love to learn and share what he learnt with all.

I am cautiously refraining from giving any credits to any of his actions like what he shared was useful or worthy etc because there are several reasons. One we are in a nation imbued with unloving critics and uncritical lovers; people susceptible to be easily emotionally surcharged, all the more surprisingly, because he was not alienated or isolated from or away from any of the big whirlpools of identities mentioned above [namely religions, political ideologies, socio –cultural bias etc] that engulf ordinary mortals or at least entrenche them with some of their  dampness.

He was in the midst of both tall statesmen like political leaders and small political manipulators, in short had to be in the thick of politics but never overtly showed any political affinity nor made any political statement.

His cultural interests were influenced initially as they ought to be by regional socio- cultural milieu, religion in which one is born into and the religions that one sees practiced around etc but as he matured with unbiased appreciation and inhibition-free inquisitiveness coupled with  his incisive mind and open heart made his cultural interests to be impacted by aesthetic sensitivity in tune with his inherent attributes of  sense of balance and calm disposition that he ventured into learning a lot of  things from other religious texts, various forms of Indian classical music, literatures of different genres and of many languages etc.

Despite all great strides that he has made in the field of science he was never a prey to any fanatical academic fixation preaching that some particular scientific approach as the panacea for all of India’s short comings.

The hall mark of his greatness was his ability to maintain a sense of balance in the midst of all trails starting from the pangs of hunger and poverty to  dealing with delicate obligations of tackling perversions of political world.

By birth, name, charitable disposition, untiring hard working instincts and focused sincerity of devotion and courage of conviction he is a Muslim; by academic qualifications he is a scientist; by  the topmost post he held he is one among the great  Presidents of India; by profession and passion he is a teacher; by some of the things he liked and practiced he is a greater Hindu than most Hindus are, especially his not unduly bothering about the results nor claiming credit for any great result and not bothering about any material possession- a great manifestation of detachment to the fruits of karma as preached in Hinduism; a greater Christian than most Christians are ; by cherishing with pride the greatness of India’s rich heritage and living it by practicing in his day to day life he is a greater nationalist than any of those mere real-estate-expansion venerating patriots or publicity peddlers singing refrain of India’s past glory; his foresight in terms of economic advancement of the nation is commendable because it was not influenced by any imported theories of  economic development but was purely based on our nation’s strengths and requirements- strength are its demography of  youth and vast natural resources and requirements are creating enough opportunities for their education, developing scientific temperament and development of rural life with availability of certain basic vital resources like water, electricity etc. But by the way he lived his life, inspired [especially young children and youth] and loved everyone to live it that way and enjoy life in its fullness and share it with all, he is a highly qualified, sensible, humble and simple humanitarian above all.

His humanitarianism was not one propelled by any blind faith nor any institutionalized publicity posturing nor any NGO funded exhibition but born out of real sensible concern for life in general and the welfare of the great nation which has given him and offers to all sincere souls such unique opportunities. This made him use his discretion and not discrimination for any consideration. He carried on his activities with very high caliber, clarity of thinking and contextual relevance. He did not succumb to sanctions, to sermons or to diplomatic wheedling. He did not shower any undue favor to anyone on any basis or refuse to help any deserving soul.

He was preaching peace with scientifically enhanced strength through our nuclear power, harboring harmony, spreading happiness, hosting honesty and humble humanitarianism based on care and compassion for other human beings beyond restraints of religions and the constraints communal divisions, of course with recognition and respect for the higher or superior or invisible divine power with the necessity to take care of the economic, material and environmental welfare of the society at large.

He was an example of a person with unique aesthetic sensitivity, scientific temperament who presented a more polished psychology of human personality; chemistry of human rhythm which moves the inner self in perfect  harmony with the outer world because such souls do not take a stand and stand put there forever; but understand the importance of contextual relevance to effect the necessary changes; these attributes anoint an attitude wherein it creates a physics of gravitational force of love and supplies a sociology of inter-human contours and proper perception of philosophy of life.

Serendipity is an invisible angel that favors this great nation, against all odds, listening to concerned minds through clairaudience and cares for the silent pleadings of the collective consciousness of the nation and invariably sends appropriate souls to it in suitable situations or to create suitable situations. So, it was no surprise that A.P.J. Abdul Kalam chose and was chosen by groups/people with mutual understanding and good intentions of the nation above everything else.

I made a twitter slide after his demise, not with a photo with him, but the following message which I thought needed no elaboration. However, as I have been asked to write a short biographical sketch I decided to write what are the things needed to be etched from his life in our hearts. I am sharing the script of that twitter slide more to make people learn the art of appreciating the appropriate greatness of great souls with  appropriate frames of reference- a useful link to one such essay of appreciation is given in the end.

Script of my twitter slide below sums it all. 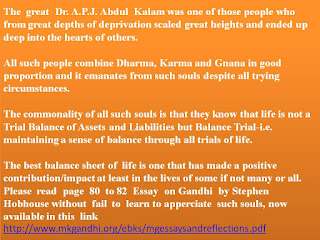