No  rituals, practices, cultures and traditions connected with any religion are part of any innate or intrinsic requirement of the human species either for its physical, mental, social or spiritual existence.

However, over many generations  they ( many practices of many religions ) have contributed so many positive and pleasant aspects to enhance human EXISTENCE into a better LIFE with good intentions and sometimes with great results too.

Many individuals, groups, societies and nations have appreciated, understood and adopted those practices because of the significance of those practices.

The problem arises when there is an attempt to institutionalize and claim only one's own version is the best and with a dictat that only such version must be followed by everyone.

It was this facet of religion that has caused much destruction and many deaths.

There must be freedom.

The very essence and extraordinary greatness of Hinduism is its unqualified freedom and uninstitutuonlaised belief system and practices.

That is perhaps the reason that its survival does not depend on either any individual or institutional sponsor or safety guard.

The very fact that NRMs and multitude of cults mushroomed some 50 years back was an indication to all status quo addicts and venerators in the realm of existing world religions that human beings are seeking many more things from religions beyond what is already being offered by religions.

Any extraneous project or product must attract human being not compel through interference.

In the process of evolution everything changes:- values, ethics, morals, beliefs, ideologies etc.

NRMs have popped up to provide the much needed tools to deal with the changes.

This is one more reason that many of Hindu teachers have been able to reach out to many people cutting across many nations, religions, languages, cultures etc like Prabu Padha of Iskcon, Sri Sri of Art of Living, Maa AmirthanandhaMaayi, Jaggi Vasudev.

It all started with the great Swami Vivekananda who brought out the philosophical essence of religion viz a viz its relevance to human life in the idiom and language in which the non Hindus would understand that  such philosophical aspects too form part of religion. 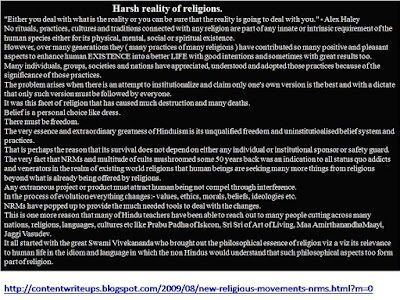 Email ThisBlogThis!Share to TwitterShare to FacebookShare to Pinterest
Labels: Reality of ​​religions, RELIGIONS