Art and exposure of insecurity

TTT=Taking sensitivities, Toeing in Aesthetics, Tuck in incentives to artists

I wish those who are tolerant to take in multiple views and various perspectives to go through the links and sublinks, assimilate the substance and make a substantial evaluation.

Matters of culture, psychological appeal cannot be sustained by petrifying it in the name

I think if we let things happen without too much of fuss there would be less publicity.

Even AI and neuro chips cannot find, much less fathom the depth of hidden intentions and ulterior motives.

In any art form any artist can present anything as long as it does not hurt the sentiments of anyone, especially those practising  the local heritage and culture.

The inter religious and intercultural activities are, perhaps, the only way of sustaining the relevance of many religious and traditional practices in the modern world where people have multiple entertainments, diversions, duties and multitude of interpretations for everything.

If we exhibit phobic reaction to everything then that by itself is sending a signal to other camps that we are suffering from covert sense of insecurity.

Over protectionism, hyper reactions of objections and exaggerated exclusivism are also manifestations of insecurity.

In evolutionary biology there is a species called sea slugs which use their brain to find a perch to access their food and once that activity is over they eat their brains because their brains do not have any further use.

Similarly, those with narrow agenda of a fading activity which gets hardly noticed or mired in controversies in the land of their origin will swallow their own misdeeds.

History is witness to this. No one who has messed up or messed around by misusing really profound cu

​s​
pered but on the contrary had to either retreat or fade away.

Indian music is so rich that I wish its ragas and talas inundate all types of music all over the world.

The world of music will benefit.

Then the world will start wondering at our rich  music.

It cannot be confined to two pincodes in Madras and three states in USA.

I have read somewhere even Dag Hammarskjold, the most philosophical UN secretary, reiterating that. 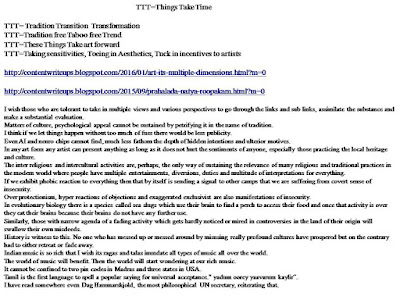 Email ThisBlogThis!Share to TwitterShare to FacebookShare to Pinterest
Labels: Art and exArt and exposure of insecurity, insecurity