Anything which fails or anyone who fails to adopt to changes, refuse to make minor adjustments or if necessary to carry out even some compromises would cease to be contextually relevant.

Such luddites will eventually get pushed away.

Evolution has ensured that human beings as a species have moved from kuru disease contacting cannibals to cyber gurus.

Everything in every domain constantly evolves as excellently brought out by Matt Ridley in his wonderful book ' Evolution of everything' which I am reading for the 5th time in the past 6 months.

It is a specious argument to say many may not be there to see the changes or the impact or effects if the changes.

After all,  human life, more so individual human life is just one more piece in the dynamic jigsaw puzzle called Life as a whole which keeps changing its design.

So, everything has to be evaluated in terms of its inherent attributes, inherent merits or value or utility and contextual relevance.

Classical example in recent times is Tibet which refused change and thought that life is confined to monastery.

When adopting to change became inevitable some immolated, some chose to run away as refugees, some decided to succumb to Chinese requirements.

The main culprit India and some western countries were keeping Tibet in ICU for too long with glorious lip service.

We can only postpone the inevitable at our own peril.

Indian public sector postponed the use of computers till PVN came out with a compromise solution.

Dr.S. Kalyanaraman a great scholar and a common friend of Nandu and me struggled hard for 4 years to introduce computerization in Railways in the late 70 i e .78 when I was still in college, later on Asian Development Bank too his services for entire East Asia with head quarters at Manila. 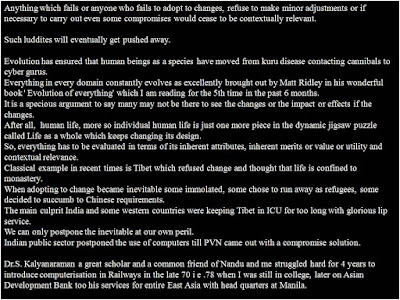