Crimes Of Crass Conflation by divisive narrative peddlers claiming to be journalists.

This type of ideological extrapolation is real diversionary tactics which is bad and blocks independent thinking, reasoning and freedom of expression.

Often the perpetrators of these narrative peddling activists  are moving around with hidden agendas, ulterior motives, surreptitious undercurrents,  political overtones all coated or covered with a lid of some  ideological insinuations or extrapolation will keep under constant pressure many to merely exist through a life of routine with simmering discontent and lurking suspicion with murky vested interest domineering behavior patterns which will cause more harm to one's own mental peace because of these huge carapace of negativeness that will cover the mind. 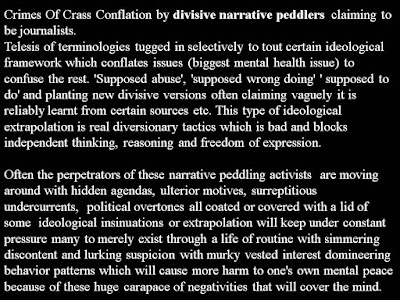