Bharathiyar​​ is called a Mahakavi Bharatiyar

Why poet Bharathiyar​​ is called a Mahakavi Bharatiyar is because he was in parts all of the following poets rolled into one.

A great poet with a wide range of topics and poetic style was at once fluid, flamboyant and flexible to flow with the tone and tenor of the topic.

Many people could not tune into his frequencies of ideas.

He was Robert Browning (poetry known for dramatic monologues)

S.T. Coleridge (on conveying nationalistic pride in common conversational vocabulary to ensure it had a reach)

And the icing on the cake was that he was a connoisseur of classical music that he could compose even wordy abstract poetry into great songs.

It is sad that he has not been as much appreciated as one wish he ought to have been, compared to many other poets. It was because he was not fully understood.

To understand such a unique genius one needs to tune into frequencies of compatibility levels which have a combination of intellectual sharpness, emotional concern, social responsibility, humanitarian compassion, pride in the positives of one's culture and boldness to deride the negatives and above all a combo of romantic and aesthetic sensitivity  which was encapsulated in clarity, conviction and courage. 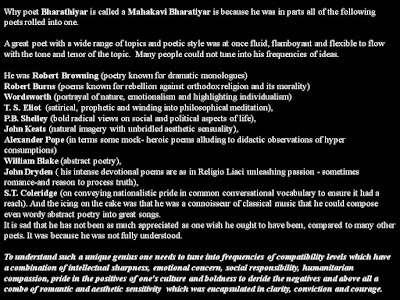