Social media is not meant to be misused to generate controversies or sensationalism as already MSM is in that business and they are big time players in that field.

Nor is social media meant to be always blindly forwarding some items, though there is joy is sharing something that one feels interesting and impelled to share with certain circles of people with similar interests.

It is as bad as cooked up and biased lies presented as statistics in MSM along with pleasant slides of graphs and charts all made to drown in the noise which are used to replace thoughts and ideas.

Data for the sake of data to create an illusion of activity and thereby mask the inactivity is also used to delude many as recently one political outfit did by splurging tax payers’ money on advertisements in all MSM.

In this context it becomes imperative to dispel facts and information which get masked by ulterior motives.

On the one hand we accept all sorts of sanitized versions of history written by paid agents and distorians, perverted media profiling and nasty narrations all passed off as popular perceptions and on other hand fanatics who lay claim to everything great and good on earth to only to some ancient Indian scriptures.

Let us instead try to authenticate whatever facts we come across, express our opinions without fear or favor or fervor but with a sense of balance emanating from rational humanism.

We need to use any technology to make life and living better, comfortable, easy, happy, peaceful, useful and more meaningful as we do with electricity.

Internet and social media are one such wherein everyone must benefit from ego-less expressions, faceless talents and fearless but sensible opinions, preferably not hurting any perceived ideological outfits as more and more people have lost even any sense of humor.

Anything and everything can be magnified into a controversy and therefore it would be advisable to tread with diplomatic vocabulary. 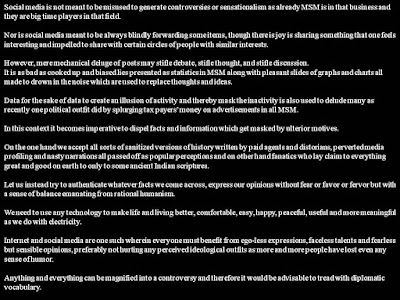